So you’ve been given the seemingly, or realistically, daunting task of reevaluating your company’s website. The consensus is probably that it’s outdated, lacks certain features, isn’t performing as it should, or doesn’t portray the company in the correct light. Possibly all of the above. Before starting your research on website redesign, however, you should familiarize yourself with the options available to you.

Web design can be divided into two distinct groups: Traditional Website Design and Growth Driven Design (GDD). Growth Driven Design has taken center stage in the past couple of years, and for good reason. Its structural differences allow for reduced costs and time investment along with improved results. Let's examine GDD and delve into benefits of this approach.

What is Growth Driven Design?

GDD is centered on making continuous modifications to a website based on an in-depth analysis of data in order to deeply engage visitors and have them perform an intended action. This approach is all about catering to the needs of your target market so as to increase lead conversions.

GDD is a success when it results in a “peak performance” site that takes considerably less time and resources than would have been necessary with traditional web design. It is important to point out that GDD is not meant to be a quick re-creation of a new website. Rather, GDD projects are based on regular updates that improve a website's functionality and appeal to target customers.

The GDD and traditional web design processes are polar opposites in most regards. The average traditional web design project forces designers to work tirelessly in a small window of time to create and polish a site. This process is typically repeated every three year or so in order to optimize the site to function with the latest mobile devices, appeal to an evolving customer base, provide an updated reflection of the company's improvements and more. GDD is more of an incremental process that mandates an ongoing effort to regularly improve every aspect of the site. As a result, GDD creates a superior site, ameliorates budgeting challenges and usually takes less time than the traditional web design approach.

Think of the GDD versus traditional design debate as a house that must be built. The traditional approach dedicates a massive amount of resources and effort into erecting the house in a rapid manner. The GDD approach is much more strategic as it involves an extensive analysis of factors, the construction phase and ongoing follow-up improvements across time. In the end, a house that is rapidly built and left alone for years will suffer all sorts of breakdowns while a house construction project that is strategically planned and consistently updated will be much more likely to surpass the builder's and tenant's expectations.

The beauty of financing a GDD project is that it begins small and gradually transitions into a cycle in which costs can be fairly accurately anticipated. Alternatively, traditional web design for the typical small to medium sized business will cost anywhere from $10,000 to six figures. This money is almost always paid up front. It is a gigantic investment that must be repeated every year or two. Though some GDD projects end up costing more than traditional web design projects, the GDD approach will always pay for itself in the form of superior results. Marketing experts agree that the average GDD project yields 20 percent more return on investment than traditional web design projects.

The Growth Driven Design approach has two distinct phases that are spilt into a 12-month time frame. The first phase takes place in month one and includes in-depth Strategy and Planning in order to lay the proper foundation, Wishlist creation to outline all ideas you’d like included on the website, and building and launching of “Launch Pad” website, an initial site that serves as a starting point.

The second phase is the Growth Driven Design Cycle. After the Launch Pad website is up and running, the next 11 months are used to improve and tweak the site's usability, appearance and other aspects of performance. This phase is reliant upon four steps:

Then, repeat the same cycle each month. 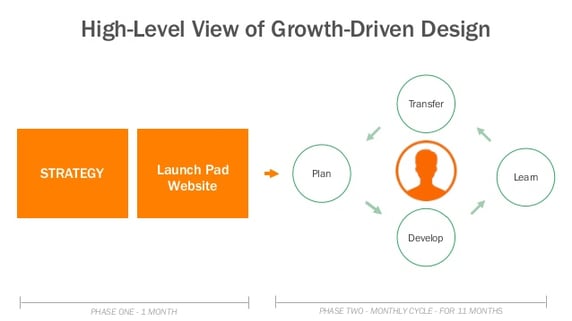 Benefits of GDD vs. Traditional Design

The main benefit of the GDD approach is its return on investment. The client doesn't have to plop down an enormous sum of money all at once yet the ever-evolving website will certainly make a positive impact on the bottom line in the ensuing weeks, months and years. The problem with relying on the traditional web design approach is that it is a costly temporary fix. Traditional web design fails to streamline improvements across posterity. Rather, they are jammed into a short period of time every few years.

Another key benefit of GDD is that it produces data-driven results. Agencies who employ the GDD method study the business, target customers, industry trends and other relevant data to build a website that is geared toward improving the client's bottom line. This is the type of nuanced attention to detail every business owner needs and deserves. Oftentimes, traditional web design is centered on the look and feel of a site rather than using the site as a vehicle for lead generation. All too often, this approach leads to a website's launch and a failure to follow-up on visitor feedback and other key data metrics in a timely manner. It is quite the contrast to GDD in which the website is regularly improved according to ongoing analysis of the website's results.

Marketers and designers who swear by GDD approach will testify that consistent tweaks and additions are one of the keys to a site's success. In some instances, infographics, blogs, and other new content must be implemented. In other instances, the website must be regularly modified to function more fluidly on recently released mobile computing devices.

As time progresses, agencies will likely make the transition away from traditional web design toward Growth Driven Design. It is a mistake to think that a new website can be launched and remain fully intact without modification for years after it debuts. Leaving a website alone following its launch will undoubtedly harm a business's bottom line. This is precisely why the dynamic GDD approach has quickly gained favor over the comparably static traditional web design approach.

Is your company looking to implement a website redesign? Learn about a smarter approach to website design that produces better business results. 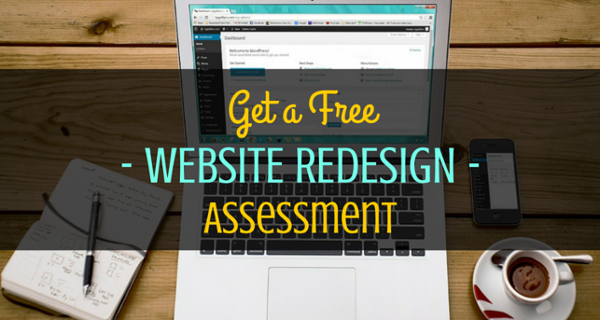 These Stories on Growth Driven Design

How Many Bad Website Design Sins Are You Guilty Of?