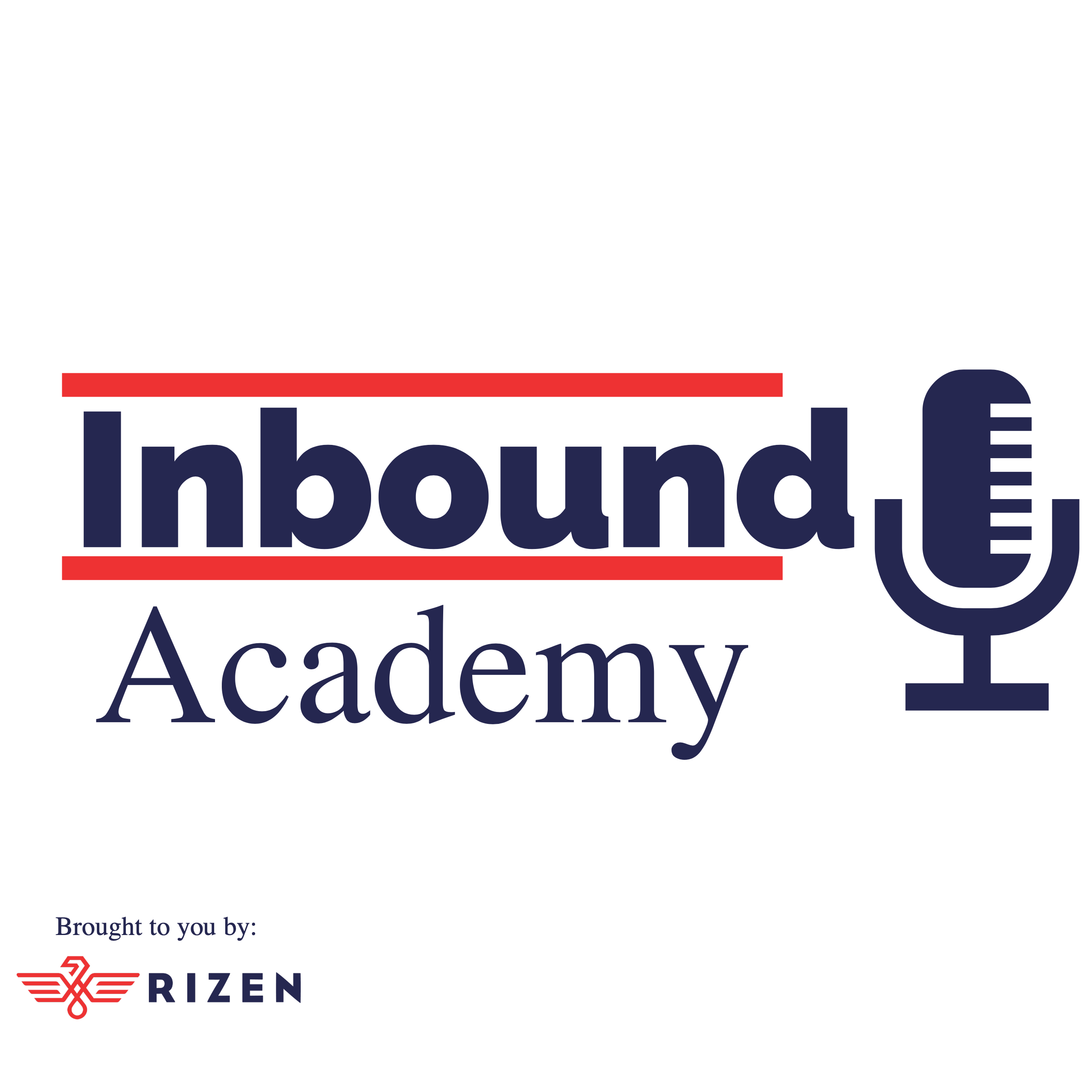 Today on Inbound Academy, we’re going to discuss if traditional marketing is dying. 1998 called, and it wants those cold calls and billboard ads back!

Jeff Lambert:      Today on Rizen Academy, we're going to discuss why traditional marketing is dying. 1998 called and it wants it cold calls and billboard ads back.

Jeff:     Hello and welcome to the first episode of our podcast everybody. This is our maiden voyage and we are officially underway. I am excited, we are completely dedicated to talking about inbound marketing and how it can help grow your business. That's what this podcast goal is and we're hoping that you'll grow with us week to week because each episode is going to build on each other. So joining us for our very first episode today I'm joined by the CEO of risen and he's a friend of mine. His name is Rogelio Rodriguez. Rod, thanks for coming by to drop some knowledge on us today.

Rogelio "Rod" Rodriguez:       Thanks for having me Jeff.

Jeff:      Absolutely. And I should probably get this out of the way at first for our listeners. I refer to you as Rod instead of Rogelio cause I'm all for shorter syllables with everything. So Rod is Rogelio everybody. Yes, yes, absolutely.

Rod:    My nickname came from the Marine Corps, where I served eight years.

Jeff:      Well...let's talk a little bit more about that ride. What is your background in marketing? How did this business get started? Tell us a little bit about your story.

Rod:     Sure. So we got started back when I got back from Iraq and 2005 and throughout my deployment, during the my time that was a, you know, a little bit slower. I constantly had ideas about not taking orders when I got back home. Those ideas started growing because I started interacting a lot more with one of my current business partners. Will, the COO of the company. You know, he gave me guidance as to what I needed to do, learn sales so when I got back from Iraq, I decided to become a loan officer to learn sales .

I had this opportunity, or Will had an idea to start selling on ebay. And he had this project we worked together on it and we did very well with that product on ebay. Learning how to  optimize for the search engines for the listings that I would put on ebay. That business led to another engagement with another friend that allowed us to open up a debt settlement agency, and we built, you know, a few dozen websites around that settlement which generated a lot of leads, and did very well. And that business led to us really focusing on taking all that knowledge that we were learning in creating these businesses, to open up a marketing agency. And that's the short version of the story of how I went from an infantry marine to a marketer.

Jeff:          Now with your growth in terms of helping other businesses grow in turn, did you start off using inbound?

Rod:   No, we were a strictly SEO shop. Search engine optimization is what we were focused on implementing for clients, building out websites and then optimizing them for the search engines. In terms of inbound I probably discovered it...man I don't now, right now, I don't remember. I think it was 2011 when I discovered it. I think it was at a conference, I met a speaker from Hubspot, which is the company that we are partners with now. It blew my mind that they could build something that, that was so adapted to how humans, human behavior had changed, right? Which is inbound, like how they built it out. And I got super excited and I remember coming back from the conference and telling everybody in the office about it.

When we became a Hubspot customer, they showed me the history of engagements that I had with them and I saw had like over 87 engagements; downloading ebooks, emails, conversations with their salespeople. They had our entire relationship mapped out. And I was just in awe that I could do that for myself as well. And with our clients at this point, right, we could implement the same methodology, the same way in which they attracted me to them. It turned me into a customer and now a promoter of their software and business.

Jeff:    So why do you feel so compelled to share what inbound is with other businesses? What do you see in terms of its strengths for others?

Rod:    You know, it comes from, from my struggles, the struggles that we had as an agency building out these SEO programs for clients. We were predominantly focused on building them for the search engines, right? To rank on the search engines. And it wasn't, it wasn't that human approach, that human-to-human relationship building approach that I found with inbound. Right? Whereas with traditional marketing where there's this interrupting nature to it Those commercials in between what you're watching, cold calls in the middle of dinner, direct mail. All of these different elements that are meant to interrupt your life. They're supposed to shock you into somehow saying, hey, I'm going to love this company. I'm going to buy this product or whatever it may be. I felt that that was changing. I felt that the traditional way of marketing is becoming less and less effective. I mean more today. It became a choice between inbound vs outbound marketing.

So then back in 2012 when we started this, um, and it's really, that shift, I felt inbound filled that need for us to continue to grow as an agency as well as, for our customers to be able to grow holistically.

Rod:    Just like I mentioned, TV commercials, direct mail, cold calling, anything that that keeps you from the moments that you're enjoying. It is typically an interruptive to be a traditional marketing method. Now it's not dead, right? There's a place for it. It's not dead completely. I think it's one of those things where it's dying, but people are figuring out a way to shift their attention.  The traditional marketing, for example can adapt, maybe direct mail, it can be more targeted and more focused on engaging than interrupting. Same thing with, with commercials that are becoming more entertaining as well. Right? People sit through the commercials in the Super Bowl because honestly they're great. I mean, yeah, they're the best of the best. But all of these things are shifting.  It's a shift in the human behavior that's happening and we have to take advantage of it.

Jeff:         So why do you think that traditional marketing has become less effective in recent years?

Rod:   People have changed. Buying behavior has changed. Uh, I mean, just, uh, the elephant in the room is Google, right? Google changed the way that we behave - we learn the way that we research. I mean, typically when I have a question, I literally pick up my phone and I ask Google. And now with the shift in how search happens, whereas, voice true voice search is available as well. So all of these changes are, are really making it so that traditional marketing is becoming less effective because there's, there's more effective ways to reach individuals through search, right? Intent-Based. Based on delivering something that people want to consume because they're looking for it. They're initially looking for that.

Jeff:         So, you know, if we're trying to get away from this, because it's not effective and disrupting people's lives and going out and searching for customers, inbound is offering a better way, right?

Rod:        Yes, yes. The approach is more holistic. It's based on an understanding your consumer, your buyer, and understanding them so much so that you understanding the way that they buy and their mind's process and then providing them the content that they're looking for in each stage of that buying process.

Jeff:    Do you feel that inbound is a smart move for any business in today's economy?

Rod: Yes, I believe so. I believe that every business can use the principles of inbound to attract more customers and become successful.

Jeff Well, you know, I certainly look forward to discussing this issue with you more as well as with some of your colleagues as well as we jump into inbound and really try and help other people be able to figure out how this can fit into their current business models. So Rod, thanks for coming by today to the studio to kick things off and talk about this topic a bit more.

Jeff:   And to our listeners, thank you. You've joined us on our first episode. We have many more to come. You can always expect a new episode every weekday to be released. They're always going to be no longer than 10 minutes and they're always going to be focused on trying to help you grow your business. You can partner with risen if you'd like to find a company that is focused on building relationships and really wants to be able to bring goals to your business. When it comes to marketing, you can find out more at www.gorizen.com also check them out on social media. They're available on Facebook, Instagram, and Twitter at Rizen_Inbound. That's one word, Rizen_inbound. Thanks for joining us today. We'll see you on the next one!

Want to stay in the know?

Join us, and get all the podcasts and more straight to your inbox.

These Stories on Inbound Marketing

Reignite Your Millennial Marketing Efforts With These [On Fleek] Ideas

7 Tips for Delegating Effectively as a Marketing Manager

How to Minimize Marketing Expenses (While Attracting More Leads)